The beginner's guide to throwing darts. 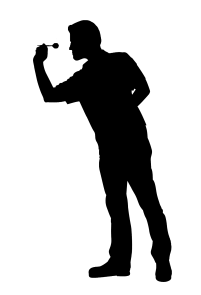 Although the title states the beginner's guide, regular players may also find some of the detail useful. You may find just a minor tweak or two will improve your game.

I have thrown darts coming on nearly forty years and during this time I have had periods in my life when the darts have gone in the draw for a few years either due to work commitments or location moves. When you pick up the darts again you need to relearn! Following on from a coaching course at work I found myself analysing my dart throw and the dart throw from the professionals.

Giving myself regular feedback and changing parts of my throw I managed to improve my throw and throw consistency. To put this to a further test I stopped playing recently for nearly four months and used the techniques I am sharing with you to regain a level of competency. By this I mean I was back to scoring regular one eighties. However like any dart player will tell you in order to be consistently good you need to put the work in and Practice, Practice, Practice.

So let’s move on and start explaining:

If you treat darts seriously then you will find it is like most sports. It requires dedication and Practice in order to achieve a high level of competency. However, most of us still treat this sport as a social game, just to be enjoyed over a social drink in a bar or club. There are also others that want to gain a competent level and play in competitions and social league teams. Over the years I have played in both.

If you are just starting or you are looking to improve your game then you will find a number of Practice games on this site that will help you do just that. But first, let’s look at some basics.

The player’s stance, the grip, the aim, the throw and the follow through!

If you have played a racket sport then you may have been shown how to hold a racket, shown how to follow through with your swing once the racket has made contact with the ball. Never take your eye off the ball springs to mind when I was learning how to play squash and lots of techniques from stance, breathing, adjusting sights when I was learning to shoot in the army. Boxing or martial arts competitors have a strong stance to deliver effective consistent blows. The one thing in common is there are some basic techniques and with Practice and dedication these will improve your sport.

Variations of stances have been adopted over the years (see below). However, the one we will be concentrating on is the throwing arms foot forward. This is to say if you are right handed and you intend to throw with your right hand, then you place your right foot forward to the oche line.

Early throwers would adopt a stance as shown in diagram No.1. Booth feet forward touching the oche line. It seemed to be frowned upon to lean forward or move along the oche line as we see regularly today. You may still see one or two social players using this form of stance but it doesn't help keep the upper body stable therefore very few people use it.

Best foot forward this is sometimes referred too. The lead foot here the right would indicate a right-handed thrower. This is a much better stance and gives more stability to the upper body.

The last diagram shows the lead foot adjacent to the oche line. This requires you to view the board side on twisting your body slightly. Some players find this a little uncomfortable however it reduces the unwanted movement in the upper body. Top players will mainly use stances based upon diagram No2 & 3.

You should line your foot up so that you are central to the dartboard. Movement to either side can be adopted but for beginners, this is the best Practice and most professional keep to this technique. The left foot is situated behind the right. Lean forward slightly placing the bulk of your weight on your lead right foot and adjust your stance slightly (if needed) so that you are comfortable with the position. Your stance should be strong and stable. You should feel comfortable in this position, but at first, this will appear alien to you if you have never played before.

The stance will be slightly adjusted during the course of the game i.e. when lining up to hit a double either side of the board or lower board trebles. As the stance acts a bit like a rudder of a boat with the front foot as the pivot and the back moving to the left or to the right naturally changes the angle you face the board. Also bringing your back foot closer to the front foot or further away adjusts your height. Do this with a pair of dividers to see this clearly. Minor adjustments in the stance positions will line the dart throw up correctly. It helps to be conscious of these movements as this will help you later when you need to give self-feedback.

How can the stance help my throw?

Before I move on to holding darts, aiming and the throw itself. Many viewers ask “how can I improve my throw?” Well, it boils down to analysing all aspects of the throw but one thing that tends to get overlooked is the stance. It is important to get this correct.

A couple of examples:

Q. I hit a lot of fives when throwing for the twenties how can I stop this?

A. If right handed try moving your back foot more to the left as this will adjust your throwing angle pulling your body to the right and align you correctly towards the twenty segment. The reverse is true if you are hitting lots of ones!

Q. I sometimes throw low darts i.e. just under the treble twenty, how do I adjust my throw?

A. A few answers here from the throw to the weight of darts, however, bringing your rear foot closer to your front foot naturally increases your height. By not adjusting anything else with your throw you will now throw higher and your darts should land in the desired scoring area.