Dartboard set-up for various dartboard types and for wheelchair users

A commonly asked question is what height and distance to the oche should a dartboard be? The detail below covers the Standard (steel tip) Dartboard or in some quarters called the London Board. The set-up can vary for other Regional dartboards i.e. the Yorkshire Dartboard, the Fives Dartboard, and the smaller Manchester Dartboard. These dartboards can have either different board height or oche throwing distances. With Soft-tip Standard Dartboard the recognised throwing distance is 8' (2.43m) not 7' 9 ¼” (2.37m) as shown below. See regional dartboard section.

The measurement is still shown in metric and non-metric (imperial Feet and Inches). The modern set-up uses the metric equivalent to the imperial measurements. You can download the dartboard setup from this page for both the standard abled body height and the disabled wheelchair height which was agreed by the World Darts Federation in 2012

Soft-tip Dartboard setup details are also shown here, however, I have not included a diagram. 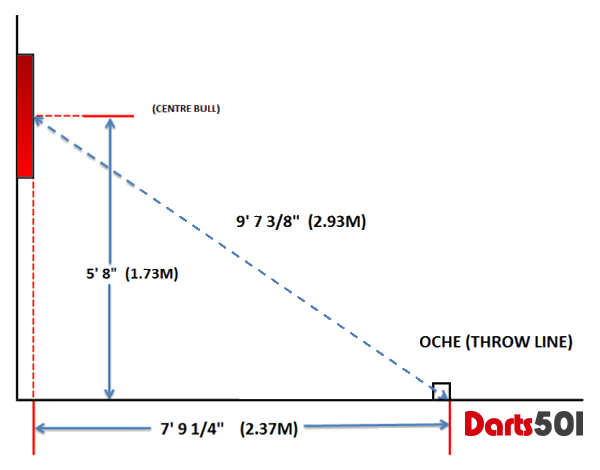 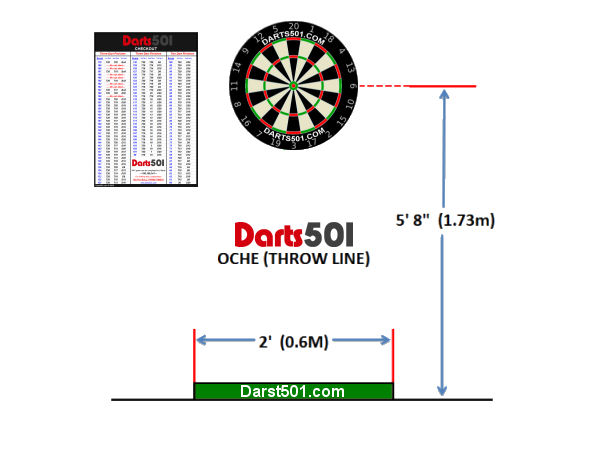 This website contains both metric and imperial measurements to set-up the standard ‘clock’ or ‘London’ dartboard. Those of you with a keen eye will know that the 5’8” is in fact 172.72cm not 173cm as illustrated so what should the height be?

The height since the formalisation of both height and throwing distance should be as show 173cm height and 237cm length. The imperial measure for the height was rounded up by 0.28cm a very slight change however other regional dartboard height is still referred to in the older imperial measurement but you will see I have also added the metric equivalent.

Minimum 2' (0.6m) clearance both sides of the board (remember darts are sharp!).

The board should be mounted flush to the wall not leaning forward with D20 directly at the top.

A commonly asked question is what distance should ladies throw from?

Why is the Hockey / Oche and dartboard height such an issue?

Scholars of the sport may have read there have been, and still are, many variations of the dartboard. The common dartboard we see on TV and probably play-on in pubs and clubs is known as the standard London clock dartboard but it hasn’t always been that way.

For this reason, confusion set in on what the setup for a dartboard should be, above is the Official set-up for the standard board but what about others?

Throwing distances and heights have varied over the years and today different leagues still use a different measurement. I have listed below the standard measurements used. However, I am sure others will say we play from x distance different from what I have stated. I know some ladies leagues do use shorter throwing distances but this is not true for official competition i.e. WDF, BDO competitions.

The standard dartboard setup is used by the WDF, BDO, PDC and other official bodies. As for the others, I have checked with the regions, to confirm the setups for each.

The figures here are rounded to the nearest CM and 1/4". Modern setups use metric measurements however I have shown both for reference.

The above is the official board heights and accepted throwing distance, however, some leagues may vary so please check your local league setup and rules. As stated the measurement conversion are rounded from the imperial to metric.

The Yorkshire Dartboard: Some may disagree with the set-up I have listed above and this may be due to changes seemly adopted in parts of Yorkshire but not necessarily all. The information I have gathered from Yorkshire and Professional Dart players confirm this set-up, however, I am aware that some set the Yorkshire board up as per a standard clock board.

The Board should hang securely from a wall so that the height of the centre bull is 5ft 6ins from the floor.

The throwing distances can vary from anything from 9ft face of the board measured horizontally. This equates 10ft 6ins when measuring from the Centre Bullseye to the rear of the Oche.

** The Ipswich or Wide Fives set-up is shown as the standard setup, however, I am waiting for confirmation as this may well change to the same as the London Five Dartboard.

The Lincolnshire Dartboard (15” dia dartboard) setup details are supplied by the Lincoln and District darts league.

My thanks to John Lowe, Yorkshire Darts and Lincoln District Darts Leagues for the information they have provided.

In 2010 Russ Strobel submitted to the Darts Australia a new recommended dartboard height for Wheelchair users. The height Russ has come up with is 137cm to the centre Bull. The height was based on the perceived origins of the standard hanging height of the standard clock dartboard. It is said the average height of a man in the England UK was 5’8” around 1920’s, the height to the centre bullseye of a standard board. Modern adjustments make that 173cm. Russ has taken this analogy and worked out what the height would be should a man of 5’8” (173cm) be sitting in a wheelchair. His exact figure came out to be 136.5cm however as Russ explains the addition of 0.5cm would make the recommended wheelchair dartboard height easy to remember 137cm (wheelchair) - 173cm (Standard). I agree with you Russ we all like things easy to recall.

This new height for wheelchair users was recognised by the WDF on October 8th 2012. The first World Disability 'Winmau' Masters took place in 2014. Read more about Disability Darts 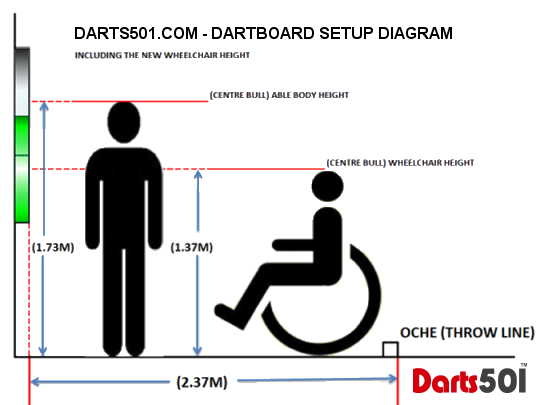 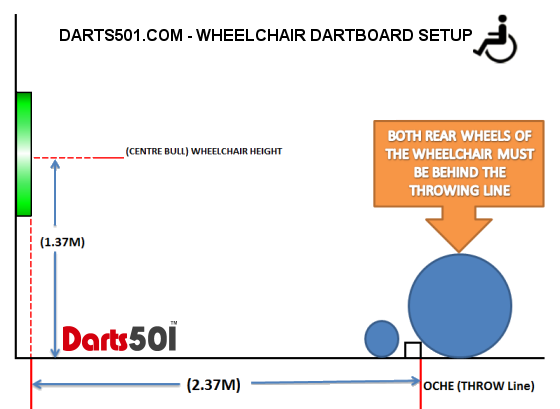 For information on how to light your dartboard  please click here