Home / Practice > Darts 180 Around The Clock

Darts 180 Around the Clock!

180 Around the clock, easy to play hard to master!

180 Around the clock, easy to play hard to master! This practice game or routine can also be played as a game. It is designed to improve your accuracy across the dartboard and doesn’t centre on a couple of standard target areas most players opt for when they practice. The routine/game is very addictive and what might first seem simple is indeed difficult to achieve a good score.

Play as a game or play just to improve your darts. If you want something to test your skill and help improve your accuracy across the board, not just the Treble 20 and double 16 then give the game/practice routine ago. I have laid down some target levels and many have reported that this game has improved their throw. Enjoy!

Players: One or more

Here is a nice easy warm-up game that helps improves your accuracy around the board.

First of all this warm-up game or practice game is not about scoring 180’s it is about practising trebles around the board. The practice game can also be played as a game against an opponent or on your own. 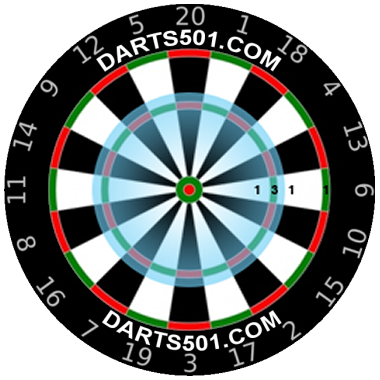 You basically throw three darts at each number, in turn, aiming for the treble i.e. 3 darts at number one or treble one. If you hit a single one you score 1 point if you hit a treble you score 3 points the most you can score in any throw is 9 points doubles are considered as a poor throw and only score 1 point. Regardless if you hit a single or treble you move to the next number in this case number two and repeat the feat. A single two scores 1 point and treble scores your 3 points. You continue around the board until you have completed all twenty numbers and then add your total. If you manage to throw three trebles on each throw your will score 180 hence the name!

If you are playing this game by yourself I suggest you set yourself a target i.e. 60 points. This means you only need to hit three singles in each number to achieve this target number. If you are a regular player set this target higher I suggest 75 – 80. Alternatively, keep a running total of your scores and aim to better the score the next time you play. You will be surprised how this basic game will improve your overall game and become an addictive as you try to improve your score.

Remember doubles are considered a poor throw in this game, should you hit one you only score one point.

To give you a guide on your performance:

Playing as a Game?

If you play the 180 as a game against friends then you can add an extra dimension to it.

180 can be played with 2 or more players but this extra dimension can spice the game up a bit more.*

* If a player fails to score on a number in a round of three darts then their score becomes frozen and they proceed no further. Other players continue until 20 or until they miss a number and become frozen. The highest total wins.