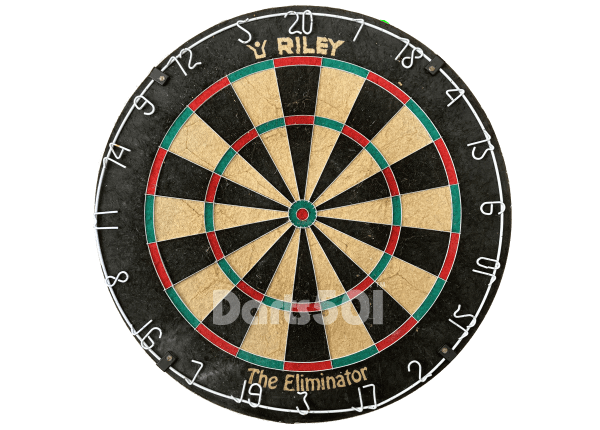 (One of the first launched in the UK)

One of the first blade dartboards to grace the UK was the Riley – The Eliminator Dartboard. Even today, it still looks the part, and I have personally owned several. They were a cut above the rest when they first became available. However, not all would give the endorsement it deserved.

Pub players would have their own league rules, many stating the board type that could be used, and this usually stated either a round or diamond wire construction. These types of dartboards had pins to hold the wire securely in place. The pins had always been an issue with players because some were pinned within the treble ring, and they took up a vital scoring area. When the first blades hit the UK market, they had no endorsement from the BDO. However, the World Darts Council (WDC), now known as the Professional Darts Corporation (PDC), chose the board to be the sole dartboard sponsors for the Webster's World Matchplay Tournament in 1996 at the Winter Gardens Blackpool, pathing the way for more manufacturers to develop their own versions.

The Rily Eliminator was initially great to play upon, but it had one flaw that caused it to wear faster than the modern blade dartboards. The wiring is sometimes referred to as the spider (web) lifted from the sisal over time to the extent that the wires either needed to be hammered back down or the board had to be replaced. i.e. these boards didn’t last as long. Today, the top of the range blade dartboards have the blades secured into the resin that holds the sisal on the wooden back, preventing the blade from lifting.

Dartboard Wires / Blades / Surface / What is the Best?

When it comes to dartboards I always say buy the best you can and I will explain why.

This page concentrates on one type of dartboard only. The most commonly used and the best known. It is the London Clock dartboard or as some call it the standard dartboard.

Over the last several years the dartboards have advanced more than the previous fifty years prior. At the high end of the market sees the disappearance of round and triangle wired dartboards in favour of the blade divider. The advantages of this type of dartboard become glaringly obvious the first time you play on one. The blade dividers are designed to reduce the amount they obscure the scoring segments thus reduce of bounce outs. Blade boards require no pinning because the blade is cut straight into the sisal and gives a clean edge that doesn’t twist, unlike pinned wired boards. Most of the major manufacturers sell Blade construction dartboards but only one bears the name Blade and that is made by Winmau. Over the years I have played on most of the blade boards and reviewed each over time. So out of the bunch which one is best?

It seemed challenging to improve on Winmau’s Blade 5 Dartboard, but the manufacturer has looked at every detail from how the sisal is stuck to the rear of the board and how it flows into the high scoring areas. The Winmau Blade 6 Triple Core Carbon, launched in October 2021, has made numerous improvements from its predecessor.

The dartboard still features a Kenyan Sisal, which I find softer, less brittle and more durable. The softer facing sisal allows the dart point to penetrate deeply into the firmer sisal beneath, which alone reduces bounce outs and dead areas. However, Winmau has gone further by redesigning the blade wiring to make the sisal flow naturally into each high scoring area of the dartboard. The bullseye has also been redeveloped to eliminate dead areas that sometimes can be found on other boards.

In addition, the sisal is embedded into a carbon fibre glue compound which holds the sisal in place better than any previously made board to allow for outstanding durability. The numbering system has also been redesigned, and the New Blade 6 Triple Core Cardon now features a laser-cut metal numbering system that doesn’t dominate or glare. It is clear and well contrasted against the black background.

It was announced in January 2022 that Winmau would be the New Dartboard Sponsor for the PDC, replacing the Unicorn, who had been the sponsor for 25 years.

But what about the others?

The Unicorn Eclipse Ultra was part of the new product range for 2022. It is at the top of the current Unicorn dartboard range and was the board of choice for the PDC endorsed until 2022. The Unicorn dartboard probably got more TV Coverage than any other dartboard on the market. The new numbers are highly visible, and the playing and wiring the best Unicorn offer. Unicorn also sells replacement high visibility metal number rings. Although the board looks superb on TV it may not be the best choice for everyone.

In January 2022, Unicorn pulled out of the sponsorship deal they had for 25 years with the PDC.

I have yet to try the new Unicorn Eclipse Ultra dartboard, so I can not give you a direct comparison other than the cost, which places the board at the top of the tree in this group.

The Target Aspar is the launched end of September 2021 is the latest dartboard from Target Darts.  The number ring is the standout element of the board and is noticeably smaller than others. So don't expect to play loop on this board! This may be a marmite moment for some; love it or hate it. However, nice construction and could prove a hit for the company.

Not all the blade construction are endorsed by governing darts bodies, that is not to say these boards are lesser or inferior quality. Above are three dartboards that are as good as their endorsed partners. The three I have selected above are all blade construction, however, all three still show the paper or in some cases the plastic veins. The veins are caused by the dartboard construction process. A number of sisal ‘biscuits’ are compressed together to form a dartboard. Where the sisal ‘biscuit’s meet forms the vein.

Although veins appear on most dartboards they are relatively thin they don’t usually cause a problem. However, on the odd occasion, mainly when the dartboard is worn, a dart hitting a joint vein may not stay in the board, hence to say why these three don’t make my top three. The Nodor, One80 and Harrows that said Winmau Blade 4 (not the Dual Core) have served me well for a few years! With regular turning, all of these boards they all should last you well.

Ok, we have had a look at the top of the range. The Blade boards so what about the rest?

Next up is the pub and club favourite. The Diamond/triangle wire boards. Although the boards are again made from high-quality sisal they won’t be dual core and will have veins and until recently all bristle dartboards were made this way. The diamond wire is supposed to deflect a dart hitting it into the board! Well depending on the angle of trajectory it will, however, these wires are pinned to the sisal and at least 50% thicker than the blade construction hence to say more bounce outs.

Generally, these are good dartboards but with wear the pins become loose and the wire turns and deforms. A dart hitting the wire can bend the wire and usually, this is in the treble twenty area. If the board becomes too worn the wire can completely turn so you have a facing flat surface and this will increase the bounce outs. My advance buy a Blade board!

The Round Wire Dartboard

This construction has been around for many years. Again pinned to the sisal as per the diamond wire and is a good entry level dartboard. If you are new to darts and want a decent dartboard to just hone your skills then go for this type of board. If darts don’t grab you then at least you haven’t spent out too much on the top of the range. If it does make your second board a Blade because you will see the difference.

Although the round wires are the thickest overall it is also the cheapest.

Another pointer to look for if you are buying a wired board not a blade, then look at the pinning construction. Most these days are pinned within the treble and double areas however if you can find one that has its pins on the outer side of the trebles then these don’t obscure the treble and double bed. These boards may also have more pins because they are pinned either side of the highest scoring segments but also allow for less movement in the wire hence a better construction.

You will find some manufacturers now only make one type of board the blade this is because others have fallen a little out of fashion and once you have owned a blade board you won’t go back to a diamond or round wire.