Probably one of the most popular searching on the internet to do with darts! Checkout Charts! Any professional will tell you it is essential to know dart combination checkouts and to commit them to memory, however, most need a starting point and here is one you can download for FREE to help you get started.

There are many ways to finish and some players like a certain part of the dartboard than others. It seems if you are right-handed throwing slightly down to a double, such as double 16 might be more preferable than throwing for double 10. Every player is different and all the doubles are the same size except for one and that is the inner bullseye.

If you are new to the sport and maths isn’t your thing, then a basic checkout chart as shown below will help get you started. However, any seasoned dart player will tell you that the combinations they go for sometimes depends on the game situation. When not forced to go for a high combination i.e. the opponent is not on a finish, they will just look to set up their favourite double.

Maths plays an important part in darts and players tend to remember number patterns and it isn’t that difficult when you consider all you need to know is your three times table up to 20 and know the inner bullseye is 50 points and the outer bullseye is 25 points respectively.

Darts can be a fun way to learn basic arithmetic. The combination of multiplication, addition and subtraction are very important in the game. You will never see a professional reaching to their pocket for a combination shot and the rules dictate the scorer or referee are not allowed to tell you how to finish a game. However, you can ask them at any point during your throw what you might have scored or how much is remaining.

Professional referees will announce, prior to the players throw, a required amount. That is if the amount required can be achieved in a three-dart combination or less. They won’t say you need double sixteen shot when thirty-two is required. 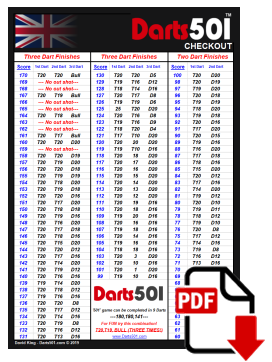 If you are looking for a checkout chart with a bit more colour to place in your club or bar the I have produced a PDF version that you can download and print. Obliviously this one will take a little more ink to print so why not laminate it so it will last longer.

That’s the way to do it!

As Bobby George says “trebles for show and doubles for dough!” Finishing games are what it all about! It’s great when you can score high but if you can’t finish you are not going to win!

Many people when first starting to play darts find it difficult to remember combination checkouts. Some combinations are better than others purely because if you miss the first shot you may still be in line for an easy single then double to finish. But knowing how and why can make the difference of winning or losing. This again can depend on what is the best three dart finish or two dart finish! Scholars of the board may give different opinions and their preferred combination route.

If your county/language is not listed, you can translate the above print versions using the Darts501 translation page. If you believe your language would be a valuable addition, then send me an email, and I do my best to provide you with a PDF version.

My apologies for any incorrect translations of your national language. Please let me know if you find an error. Thank you

To get you started here is an example showing a couple of options facing a dart-thrower. I won’t name one of my good professional dart friends who basically went about this same shot, in my opinion, the wrong way and lost the match!

Want to Save Ink Print a Black and White Version

The print button will allow you to make a Black and White version of the table below. If you would like a better colour version you can download the PDF in your lanuage above.

Here is the example:

To win you need 77 and must finish on a double! 77 can be finished by hitting treble 15, double 16, one of the nicest doubles on the board. But what if you hit a single 15? This leaves you with 62, - Single 12 Bull? Treble 10 double 16? Both are not easy to hit. But what if you decided to go for 77 a different way? Treble 19, double 10? And you missed treble 19 but hit the single? Then this still leaves you a shot at single 18 then double 20. This seems a better route and there are many shots similar to this. There are also a number of ways to finish and below just give you one way, but not necessarily the best when you have three darts for a two-dart finish.  In most cases, players should and do look for the best percentage shot. i.e. you are more likely to take out 77 by going the 19 route than you are the treble 15 route. Many will argue differently but more players are coming to realise the importance of the combination fishes.

For a more advanced dart player, there is the middle game you all should know. Many players and as the checkout chart shows, will know that there are a few dodgy numbers in darts. These are finishes that can not be achieved with three darts yet higher checkout can. The highest checkout on a standard dartboard is 170. There is only one way this can be achieved, treble 20, treble 20, bullseye. Yet 169,168,166,165,163,162 and 159 cannot be hit to finished in three darts.

The middle game is to recognise the score situation you are on and throw to leave a combination checkout. Players that don’t know the best routes to follow sometimes leave themselves dodgy finishes allowing the more experienced and well-rehearsed player to take advantage. It could mean giving your opponent three more darts to finish the game over you!

Like combination finishes, the middle game is to understand what you can score and what it is likely to leave. Like the example given above for a 77 finish the same can apply to some numbers within the middle game. Here is an example:

Your remaining score is 303

Okay, hit 180 this leave you 123 is this a checkout yes! GREAT. However, you miss one treble and the dart lands in a twenty the most you can score is 140, which would leave you will 163! Hmmm, not so good this is a dodgy number.

Top players will understand the middle game and you will see many them steer away from the twenties when they find themselves on such a number. So, what should a player throw for and why?

Top level darts are won and lost by small margins and like 303 there are other key numbers a top player need to know and be able to quickly adjust and throw for the best percentage combination shot.

Maths teachers love darts because it throws up a lot of possibilities and introduces basic mathematics into a real-world sport. There is nothing better watching your opponent go for the wrong route and miss one target area giving you extra darts to win. I always thought these are free darts, no pressure on my shot! However, darts can be just a fun game or taken seriously, but above all enjoy it.

The checkout sheet I have produced will help new players and players that find it hard to remember out shots. The checkout sheet is FREE to download and print. So why not place one up near your boardin your club so it helps you or others improve their game!

A checkout chart can also help a novice marker as they can quickly see if the remaining score is an outshot or not and prompt the player accordingly.

If you are looking a computerised spreadsheet or leg scorer, I have both on this website.See darts scorers.

To help you further with maths I have a basic darts maths page on this website. The maths page has a short video showing how darts and dartboards have been used in schools to help children with their mental arithmetic.

Many ask how dart averages are calculated. So, I have put together an example below and to show you how.

The dart average gives an indication of a dart thrower's darting ability. The higher the average normally indicates the better player. It is quite easy to calculate dart averages; basically, you just divide the score hit by the number of darts thrown. Over a match that has several legs, the average is calculated over the entire match, not by a single leg. So you win a game of 501 in 18 darts your average per dart is 28.83 per darts (rounded figure) some may then show this as a throw which would be three times this figure, 83.49. But if you lose the game what is your average? This is easy to work out just divide the total score obtained by the darts thrown e.g. 400 scored in 15 darts = 26.67 per dart or 80.01 per throw.  If you are calculating a match that is over several legs then the calculation is the same. Just total the number of points scored by the number of darts thrown.

An example of a three-leg match, each leg 501

Also, some TV events (BD0) will show the first 9 dart average as well as the overall average. This is to show how good or bad the scoring power of a player may be. Shots at double are sometimes shown as an average statistic and this is worked out in the same way.