The Manchester or ‘Log End’ dartboard is unique by today’s modern standards. This board is handmade, double-sided and made from wood. It was made using UK Elm however, the UK suffered from the spread of Dutch Elm Disease that wiped out millions of Elms by the mid 1970’s. Other soft woods such Poplar have also been used to make the board.

The Manchester Log-end Dartboard is said to be the hardest dartboard to play on due to its small playing area. The dartboards are dyed jet black, and only measure 10 inches (254mm) in diameter (wire to wire). The doubles are 5mm wide. Hence the difficultly as these are hard to hit.

The Manchester Log-end Dartboard is still played upon in some part of Manchester today, however, there seems only one person still making them, Dave Mealey. I guess others may have taken up the baton since this picture was taken. However, Dave has said he makes up to 400 dartboards per year and all by hand. The dartboard itself has a unique numbering system and is quite different from the standard ‘clock’ / ‘London’ dartboard most of us have played on and we see on TV. Although there are still 20 segments numbered 1-20 with a inner and outer bullseye, plus a double ring, the order of the numbers are totally different from any other dartboard. 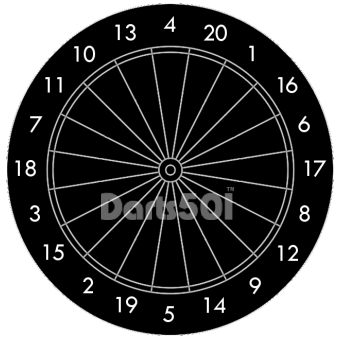 Besides the inner and outer bullseye the only number that features in the same place as a standard ‘Clock’ dartboard is ‘19’. The order going from centre top clockwise is as follows:

The boards are dyed jet black to see the embedded metal scoring segment dividers and numbers easily. The board also need to be kept immersed in water when not in use. Otherwise, the board will dry out and split. Remove the board from the water an hour or two prior to play.

It takes Dave about two hours to make each board, but how long will the Manchester board be commercially available may depend on Mr Mealey and if anyone else wishes to continue making them. Due to the nature of how the Manchester Log-end Dartboard is made, supply is difficult to find, and because these boards need to be kept wet, the turnaround from manufacture to end user is also fast. When New, the boards are supplied damp and wrapped in thick plastic film to keep the moister from evaporating as much as possible. 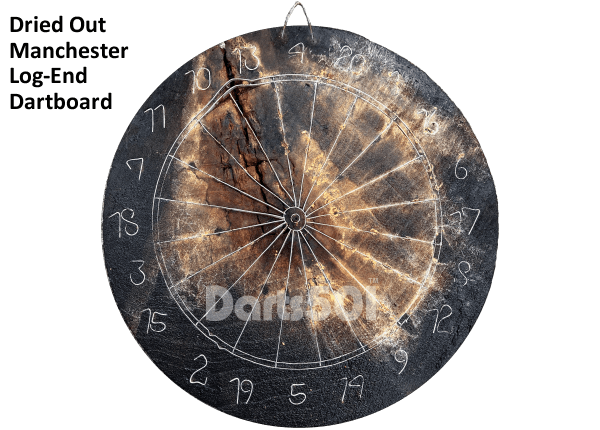 As any owner of the Manchester Dartboard will tell you, it is essential to keep the board wet; otherwise, as shown here, the dartboard will warp, split, and become unusable.

Unfortunately, the Manchester Log-End shown here was, in fact, NEW and unplayed upon. It was left in a shop that had to closed due to the owner's ill health, and after 18months plus, the board sadly dried and spilt. It is beyond repair. However, it has allowed me to show what happens when the board is left to dry.

My thanks to Graham Anderson,  Treble Darts and Trophies, Oldham for the dartboard

The dartboard should hang securely from a wall so that the height of the centre bull is 5ft 3ins / 161cm* from the floor. The toe-line or Oche 7ft 6ins / 229 cm shall be clearly marked and should be at least 18ins long. The toe line can be just a painted line on the ground or a securely raised line indicator such as a piece of wood or metal. The latter is preferable as the thrower has firm edge to rest his/her foot against.

* The height of the board can vary depending on the Manchester league. Some leagues set the board height at 5’6” although the throwing distance remains the same. 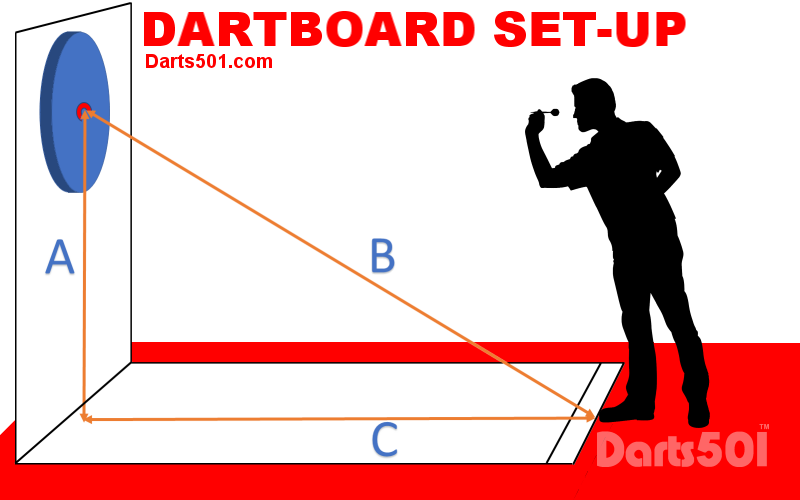 * Dartboard height can vary within the Manchester leagues.
Usually the hight is set at 5ft 3ins or 5ft 6ins”

My thanks to Graham from Treble Darts & Trophies, Oldham and John Gwynn. I can now provide readers with a contact for the Manchester Log-end Dartboard.

David has permitted me to provide readers with his direct contact number and address for people wishing to purchase a traditional handcrafted Manchester Log-end Dartboard.

Due to the nature of the dartboard, as most will know, it needs to be kept wet, so David can't post the dartboards. You will have to collect your purchase in person.

If you know of any other supplier of the Manchester dartboard please let me know. Contact.

John Gwynn writer and broadcaster was one of referes for the Manchester Log-end Dartboard, as shown here.

The short video also features some other well known faces.

The standard Manchester dartboard game is to hit in order numbers 1 to 20 and at least one double before hitting the bullseye (inner or outer). Please read on…

Each player throws in turn, if number one is hit with the first dart they progress to number two and so on. If the player should hit the double of the number he they are throwing for then they progress to the number exceeding the value of that double (if possible). Hitting double one (2) when throwing for one moves the player to number three. Should the player hit double three when throwing for three (6) they more straight to number seven. Once all the numbers have been hit the first double the player hit must be hit again before hitting the centre bullseye. If no double was hit during the progress around the board then the player must hit double 20 before hitting the bullseye.

In the case of this game the Bullseye and outer-bullseye both count as a single target. It isn’t uncommon for the centre bullseye to be removed. However, doing so prevents a 301 game being played fully.

Generally, each player’s score is must start and finish a game with a double (The narrow outer ring of the board). Competition games, however, are usually played with a straight start (no compulsory double) but with a compulsory double to finish.

The first throw is deducted from the player's start number e.g. 301 and then from the subsequently reduced total. The scorer should show both the score obtained for the throw and the reducing total remaining.

The inner bullseye (50) counts as double of (25) the outer bullseye.

The Hand Crafted Dartboard is becoming a rarity. However, if you have the skill to make the board, here are the dimensions. The wire thickness is no wider than that of a tin can. Sorry, I can not be 100% exact, but approximately 0.5mm and made from stainless steel. The wire is cut to a depth of 50mm, although it may be available in these dimensions to purchase.

The numbers are made using the same wire bent into the shape of each number and have a height of just under 1” tall. Both the numbers and wires are hammered into the pre-soak log-end. The board is dyed black, so the contrast of the wire against the board can be seen.

The board is hung from the top of the board from a V-sharped hook, probably made from coat hanger wire. The ends of the V are hammed into the board. And the conventional board is not designed to be rotated. However, both sides of the log-end feature the Manchester dartboard configuration or, in some cases, a mini London board, known as the Man-Lon.

The thickness of the board is precisely 40mm, but on this dimension only, I have given an approximate value of 1 ½”. I guess the modern wood supply measurements, but the playing dimensions would have used the imperial measurement system.

Board Dimensions shown here have been taken from an original Manchester League Dartboard.

Please note I do not make or supply the Manchester Dartboard. Please see the above details regarding the Manufacturer / Supplier

One of the leading and earlier suppliers of the Manchester Log-end Dartboard was Perrigo, Droylsden, Manchester. The board were handcrafted on the premises until 2003 when owner/maker retired. Perrigo is still supplying darts, snooker and pub games equipment but unfortunately, they no longer manufacture or supply the Manchester Dartboard.

Historical references to hand made Log-end Board.

The standard Manchester Log-end dartboard was two-sided to prolong the life of the board. However, there were a couple of variations. The Man-Lon Log-End and the Toper Board Log-End 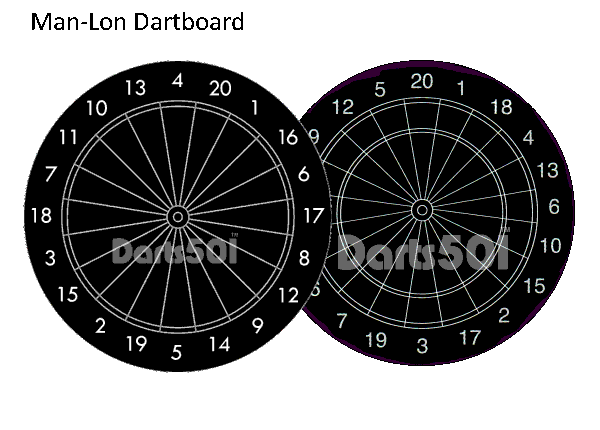 The Man-Lon was a hybrid dartboard made by Perrigo’s, Droylsden, Manchester, 1953 – 2003 when they stopped production. The wooden log-end board featured the Manchester board on one side and smaller version of the London / Clock board on the other. The idea if practised on the smaller London board it helped to developed your skill when you returned later to the standard size board. There was a minor dart league for this hybrid in Withington, Manchester, but only lasted a few years. 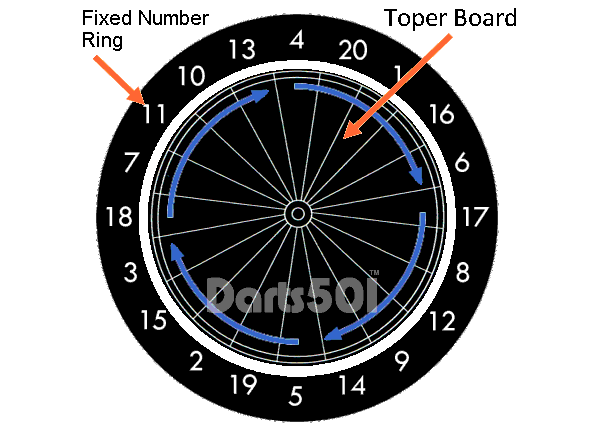 Sometimes the names don’t fit. As per ‘Dartitis’ although many know known this as a word meaning the player can not release the dart as per yips in golf. Dartitis meaning for a wordsmith word translates as inflammation of the dart, but not as we know it.

The Toper board was a Manchester Dartboard without numbers! I have no idea why this dartboard was given such a name. However, it allows the dartboard to be turned to gain even wear - the numbers where were provided on a separate ring similar to the Kent Doubles board but made to the Manchester Log-end size.

My thanks to Barry Riley, Bury, Lancashire for the Toper Board information.

Although the Manchester Log-end dartboard leagued do exist, not all have websites or are online.

If you run a league Manchester log-end dartboard league and want to be listed here, please send me an email.