Bullseye TV Game returns to the UK TV screens this spring as part of Alan Carr's Epic Gameshow series. Bullseye is a gameshow like no other and has run continuously on TV scenes it was first screened back in 1981. The format is simple, and the prizes were something else! It would bring a laugh from the audience if the winning contestants gambled the prizes and money they won along the way for the mystery star prize. Hoping for a small family car, it was often was a speedboat!

The show was probably a big gamble when it was first commissioned. However, it has stood the test of time and is one of the highest rating television game shows of all time. Who you gamble your winning prizes and money to hit 101 or more for a star prize? Three darts for the non-dart throw and three for the dart thrower. Sounds easy, but not all were successful. If you are the type of person that would gamble for the star prize, then have a look at Bettingmetrics.com where you find all your betting activities needs in one place.

Comedy legend Jim Bowen hosted the original series. Jim was a stand-up comic but often struggled with hosting the show. The first series saw Jim play both host and dart referee caller. But the programme-makers soon realised that a competent, professional darts referee was needed to calculate the scores and keep the show flowing.

Over the past 39 years, the gameshow has had several hosts, and some were only there to host a special show, not a full series.

In 2006, Granada Productions produced a new series of Bullseye for Challenge TV presented by Dave Spikey. The show's format remained unchanged, and the series went on the break all Challenge TV viewing figures with a 200% increase in average Challenge channel ratings. Bullseye became the top performer on the channel for the year, beating its nearest rival, Classic Who Wants to Be a Millionaire, by a massive 63% in rating volume. It was also the first time in the history of Challenge that they had a higher market share than Sky One.

In 2007 Bullseye was once again invited back by the ITV Network to be one of the eight game shows on ITV's Game Show Marathon series two hosted by Vernon Kay.

The seven other shows in the series were, The Price is Right, Blockbusters, Blankety Blank, The Golden Shot, Name that Tune, Mr & Mrs and Play Your Cards Right. For the second time, Bullseye had the highest ratings of all eight shows in the Marathon.

In 2011 Bullseye featured in Challenge TV's Marathon Game Show Days that ran from Monday 26th December 2011 until Saturday 31st December 2011. Bullseye once again came out the clear winner beating all the other game shows with an average of 20 -25% higher viewing figures:

Alan Carr recorded a new version of Bullseye in 2019 for ITV along with several over shows which include: The Price is Right, Play your Cards Right, Take Your Pick and Strike it Lucky.  Alan is hoping one of the shows can be taken forward to a new series.  If the past is anything to go by, Bullseye stands to be the most viewed out of all Alan has resurrected. Although the gameshow formats are likely to remain the same, Alan says there are some new additions have been made to all.

Darts fans will want Bullseye to succeed and will tune in to the broadcast in their thousands to see if the contestants are any better than some that featured in the earlier series and of course, what will the star prize, another speedboat? Fans will also hope the Bronze Bully reappear for the charity throw, and if he does who will be the lucky professional player throwing this time? 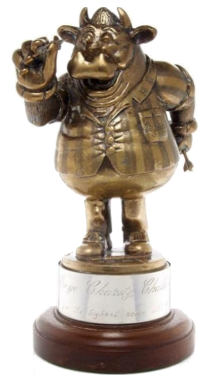