Home / News > Five Greats Who Have Graved the Game Of Darts

Five Greats Who Have Graced The Game of Darts

Some people will argue that darts isn’t a real sport, that it’s not interesting and that it doesn’t require any real skill. Those people are wrong on every point.

Just like in football, darts also requires strength, skill and strategy, and it is a sport as worth watching as the NFL Superbowl 2020. Here at Darts501 we're going to countdown from five to one our top five stars who provide the evidence to put ‘those people' firmly back in their seats.

Over the years, the below players have shown themselves to have a combination of nerves of steel, consistency and a shed load of personality.

The nine-dart finish is a big thing in the sport and, even now, sinking one generates a buzz so imagine how it felt when you were the first man to deliver on live TV. Lowe, who simply loved the sport, was a low-key figure during darts’ move into the mainstream but world championship victories spanning across three decades – 1979, 1987 and 1993 – are some legacy.

The loveable ‘Barney' can perhaps consider himself unfortunate not to be higher up this list given he’s one of just three players who have conquered the world five times, one triumph of which came with victory over Phil Taylor is probably the most enthralling encounter ever seen. Barneveld is due to retire next year but will do so having put the Netherlands on the darting map.

Darts isn’t like college football where you have the scholarship to help launch you to the big time, but that didn’t stop Van Gerwen bursting on the scene at an early age. The Dutchman became the youngest ever winner of the World Masters, and he also ranks as one of the youngest ever player to throw a nine-dart finish proving experience isn’t everything in this game.

Realistically, Van Gerwen will move into position two on this list in the near future, but he still has a long way to go to catch our number one pick, however, with age, form and three world titles already under his belt let’s not rule anything out.

Has there been a bigger character in darts than that of the late Eric Bristow? The Crafty Cockney was a founding members of the World Darts Council later to be known as the Professional Darts Corporation, PDC and also won five world championships on his way to jumping to the top of the sport. When you’re an MBE, have 70 titles to your name and have been seen as the number one player in the world on half a dozen of occasions then your place in history is pretty much assured; then you also find and mentor this man... 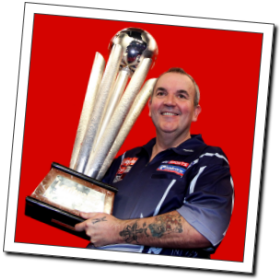 Could number one go to anyone else? We don’t think so. Taylor is nicknamed ‘the Power' and boy does he have it. When you’re a kid with a dream you have to wonder just how far you allow those thoughts to go?

We suspect the history Taylor created has far surpassed the wildest of his dreams. In 2013, Taylor bagged his 16th World Championship ensuring he had won a whopping 11 more than the next closest rival.

Throw into the mix that, in addition to the world titles, he’s won a further 198 professional competitions and it’s impossible to imagine his trophy cabinet. Oh, and he’s hit more nine darters than anyone else in history as well – that’s practice, practice, practice and not an ounce of luck.

There you have it, five players who have provided moments of joy, laughter and inspiration across generations to help elevate darts to the elite position it finds itself in today.

Have we got our choices right? Let us know your thoughts.