Home / News > The Voice of Darts

For a generation of Dart fans, Sid Waddell was ‘the voice of darts’, and there hasn’t been anyone quite like him.  Sid was an English Sports commentator that graced our TV screens for four decades, and unrivalled enthusiasm for the sport of darts not only got him in trouble but also elevated him to the top of his profession.

The son of a Northumberland miner the ‘Georgie’ lad did well gaining a scholarship to attend St John’s College, Cambridge where he earned a 2:1 degree in Modern History. Sid loved sport and played rugby for St John’s second team. It was an injury that stopped his ruby play, and at the same time, it was the injury that brought him to darts. Sid started an inter-college darts competition, and he recalls losing the final to a team of trainee vicars from Selwyn College. He recalled the vicars would have no chance and he and his plays had a few drinks too many and underestimated the competition.

It was, however, his career in darts commentary that most will remember him. Sid truly loved the sport and the transformation that the pub game had with the TV spectators.

The increase in prize funds, sponsorship and the support bookies have given the game have changed the way many perceive the workingman’s game into a multimillion sports phenomenon. Sid always thought darts deserved the big stage where many would place a bet on their favourite player. Today more promo code offers are available to new punters looking to maximise their bet. Sid was always supported the players move to form the WDC / PDC and was pleased to see his favourite sport grow.

In 1996 after a short period of working in the social history department at Durham University, Sid joined Granada Television working with Michal Parkinson on local news programmes. In 1968-74 Sid moved to Yorkshire television where he produced over 600 news programmes, and in 1972 Sid created the show indoor league which was first only shown on Yorkshire TV but went national on the ITV network from 1973-77. Indoor League featured pub games, darts, table skittles, bar billiards, pool, arm wrestling, table football and shove ha'penny. Fronted by cricket legend Fred Truman, Sid cut his teeth with some of the commentaries, and It was the darts that gained the most TV interest.

Initially, darts on Indoor league was played on a ‘Yorkshire’ Dartboard, no trebles as Fred was keen to point out. However, that soon changed, and from 1974-77 the winner of the men’s tournament gained automatic qualification to the BDO World Masters

In 1976 Sid moved to the BBC where he worked on children’s programmes, Alan Wickers World and with the eccentric scientist Magnus Pyke. His experience with televised darts, however, helped Sid to become of the first commendations of the first World Darts Championships in 1976.

The producer at the British Broadcasting Centre (BBC) reprimanded Sid for getting Moses, Rod Stewart and Ivanhoe all in five minutes of commentary. But the BBC bosses loved his commentary, and they ordered the producers to give Sid free rein. The press, however, were split about Sid's commentary. Sid said, "50% think I’m a genius; rest think I’m probably mad and possibly have Tourette’s Syndrome."

In 1994, Sid became an independently employed commentator. However, he is mainly associated with Sky Sports. Following the famous split of top dart players from the BDO to form the World Darts Council (WDC) now the Professional Darts Corporation (PDC), Sid undertook his first darts commentary assignment at the World Matchplay in Blackpool. He stayed as the main darts commentator for sky sports for seventeen years.

Sid wrote several books on darts and fiction. Including ‘Bellies and Bullseyes’, the book was shortlisted for the British Sports Book Award for 2008.

However, Sid will be best known for the off the cuff one-liners. He said he never wrote the comments down that just came to him in the heat of the action. Many a fan had to do a double-take as his commentary metaphors got the better of them. 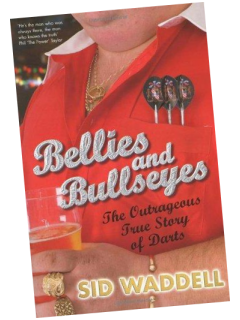 A few of Sid’s Famous quotes:

"This lad has more checkouts than Tescos."
"He looks about as happy as a penguin in a microwave."
"Steve Beaton - The Adonis of darts, what poise, what elegance - a true roman gladiator with plenty of hair wax."
"The atmosphere is so tense, if Elvis walked in, with a portion of chips..... you could hear the vinegar sizzle on them."
"Look at the man go. It’s like trying to stop a water buffalo with a pea-shooter."
"He may practice 12 hours a day, but he's not shy of the burger van!"
"He's as cool as a prized marrow!"

Sid sadly died of bowel cancer on the 11th August 2012 a day after his 72 birthday. However, SId will never be forgotten as the ‘Voice of Darts’.