Home / News > Myths that surround the sport of Darts

Myths that surround the sport of Darts

The sport of darts over the past two decades has grown beyond most can imagine. The simple game that started in the English pub has grown into one of the World’s most-watched TV sports. Satellite channel Sky darts is the second largest sport watched on their Sports channel in the UK, second only to English Soccer.

With more players from around the globe picking up the arrows, a new generation and breed of players are hitting our screens every year. Many new to the sport ask the same questions, how did it all begin, what are dartboards made from, why is the oche so-called. Also, why is the height of a dartboard set at 5’8” or the metric height 1.73m and why is there are unusual throw distance of 7’9 ¼ ” metric equivalent 2.37m.

If you search the internet, you will find contradictory answers to all the above. Some people have taken their time to research answers to these questions while others second guess. There is also a small breed who just like posting untruths to see how many they can convince with the hope they add this into a new post, tweet or add this to their websites. But before I explain and give answers to these questions, let's take a moment to look at why darts is such a popular sport to watch.

In some cases, people believe the bristle dartboards are made from horse-hair, but how wrong they are!  If on the other hand, you are into horse racing then you might like some promo codes from horse racing or you can play the Grand National dart game, rules can be found under the games section.

When it comes to sport of any kind, simple rules, drama, and the risk of failure all play a part. With darts, it has the lot. Regardless if you are a fan or not when two players playing at the top of their game slug it out there is no other sport that can compare. A single missed dart can turn a game, and it often does. The underdog can find that purple patch and defy the odds, and the pressure can be immense.  Players who falter at the highest level soon get found out, and reputations can mean little. TV darts is entertaining, fans love it, bookmakers adore it, and it comes with the razzmatazz fit for purpose.

A good player now can make a comfortable living from the sport, and the cream of the game are now all millionaires so it is no wonder why so many young players are trying to emulate darts stars of today and the past like Phil ‘the Power’ Taylor who managed to win the world title sixteen times in his career. The young ask questions and question answers as they should. To progress in any field, we can learn from the past to develop the future.

Where did the Modern Game of Darts Start?

Surprisingly the modern game came from France! Although man has thrown spears and shortened arrows in battle and to kill animals for food, there is little evidence to say the game started from here. We can speculate that in medieval times soldiers may have had a practice target such as in archery and games with small wagers would have were probably played. But the game of Flectettes (meaning little or small arrows) can only be traced back to the mid 19th century.

Anne Boleyn did give Henry the VIII a set of ornate darts!  True, but these were not darts that you would throw at a dartboard, these were darts usually from thrown from horseback to kill or maim wild boar or other small animals. Reports show some respected writers guessing these were darts for a game and it could be plausible but no evidence to support this theory.

To can read a short history of darts on this website under the history section. 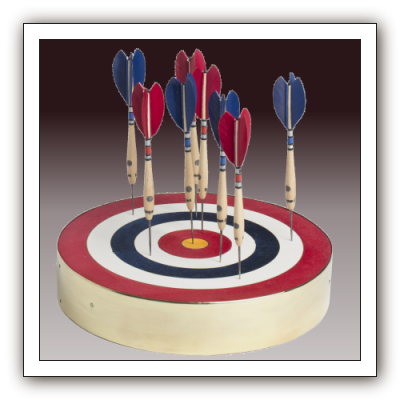 The name bristle to some has conjured up all kinds of myths. You may read the bristle dartboard is horse or pig hair the assumption being that these materials have been used to make paintbrushes. The truth is a bristle dartboard is made from sisal a plant grown in several countries including Kenya and China. Bristle is the wrong name these boards, and they should be called sisal dartboards.

I have written about the oche in some detail to dispel myths. However, the ‘oche’ was in called the ‘hockey’. If you buy a few of the old dart books or an NoW program from the 1920s – 1960s you will read players stand at the ‘hockey’, not the ‘oche’. At some point, and here we can only speculate, it is believed that a writer may have missed heard ‘Hockey’ as ‘oche’ and once in the written form, it is correct right? Wrong! However, this quick to the sport stuck, and we now refer hockey to be oche!

Myths, Beer creates from Hockey and Son used to measure and form the thrown distance! Not true, no brewer in the UK can be found that exists or ever existed. As regards the ‘Hockey’ this word does stem back many years, and you can read a lot more about the myths of the oche within the history section.

Why do we have such an unseal dartboard height and thrown distance?

Today dartboard measurements are in metric; however, it is still hard to throw away the old imperial sizes that were first used. The height of the dartboard is believed to be taken from the average height of a man in the 1920s. Little to dispute this theory; however, no written word can be found to say as much at the time this height was decided upon. Of course, not all boards are hung at this height the Manchester dartboard has a lower height, does this mean Mancunians were shorter than the average man? And here is where myths are made.

Before the UK joined the European common market, we used imperial measurements; and dart players tended to throw around this time from either 7’6” or 8’ as within the News of the World Championships. A stand length needed to use, so a compromise was made 7’9”! However, this didn’t equate to the New measurements that were to be used, i.e. centimetres, and meters hence a ¼” was added which relates to 2.37m. You can read more about dartboard setup heights on this website.

If this has whetted your appetite to understand more facts and myths about the sport of darts, then explore the darts501 website. Here you will find a treasure trove of well-researched darts information and news.