We’re just a few weeks away now from the World Darts Championship, and the sport has come a long way in the past decade or so. A player such as Michael van Gerwen and Peter Wright are much more high profile. There’s even a slot game dedicated to darts, so just how has all this happened?

After decades of being played in pubs and clubs, darts saw a rise in popularity in the 1970s. There were the News of the World Championships shown on ‘World of Sport.’ Then, came the ‘Indoor League’ hosted by former England test cricketer Freddie Trueman.

That show featured pub game such as table football, bar billiards, skittles and darts. One series featured the Yorkshire dartboard with no trebles, so 180s weren’t part of the game. All of this led to the World Championships being covered by the BBC. Players such as Jockey Wilson, Bobby George Eric Bristow, John Lowe and Leighton Rees became household names.

That trend continued with the arrival of the ITV game show ‘Bullseye’ hosted by Jim Bowen. Every Sunday, millions tuned in to watch top darts players and see what mistakes Jim would make.

When that series ended, and the darts world saw the arrival of the Professional Darts Corporation (PDC) in 1992 run by Barry Hearn. He’d achieved great success in making snooker popular, and he set about doing the same for darts. The top players from the long-running British Darts Organisation defected to the PDC, and it’s been a massive success.

Now there are tournaments being held all over the world with the next generation of darts players becoming increasingly popular. The upcoming PDC World Darts Championship has prize money of £2.5m with the winner receiving £500,000. Even the retirement of multi-time world champion Phil Taylor hasn’t hit the popularity of darts.

One reason that darts has become popular is how the fans get involved. It’s commonplace for those in the crowd to be in fancy dress. They can be seen dressed up as Captain America or a nun. With the world championships being held in December and January, there are of course also plenty of festive costumes so lookout for a few elves in the crowd.

There are many ways in which a sport can increase its popularity. Branching out into other areas is one method. It worked with the ‘Indoor League’ and ‘Bullseye’ and now slot games featuring darts are being produced. This has the job of introducing new fans to the sport, some of whom may never have seen it on television.

Several darts-related slot games have been produced in the past few years. Playtech produced ‘Jackpot Darts’ in 2015 and the following year saw 1x2gaming produce ‘Darts180’ with a top prize of 10,000 coins.

Inspired Gaming released ‘Rush Darts Live’ in 2016 with the game featuring players such as Dennis ‘The Menace’ Priestley and John Walton. They must love their darts games because the following year ‘Double Top Darts’ was released, again with Priestly involved. There’s even been ‘Darts Roulette’ (Mikado Games) and the Microgaming slot ‘Lucky Darts.’

The darts related slot games have been successful to a certain degree. However, SlotCatalog doesn’t put them in the same popularity level of games such as the hugely popular, Gonzo’s Quest Slot game. That’s not too surprising as the legendary slot game from NetEnt has proved to be a massive hit since being released in 2013.  There’s even a Virtual Reality version of the slot game. Perhaps we need more darts slot games that see players such as Raymond van Barneveld searching for Eldorado. Well he must do something after retiring from the game after the 2020 PDC World Championships.

It’d take a great deal to be as popular as ‘Starburst’ which tops the SlotCatalog rankings. That’s another NetEnt game that since being released seven years ago. The slot has enjoyed massive success and can be played on plenty of online casinos. 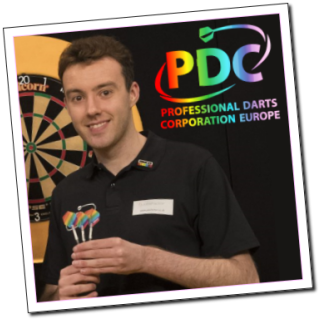 The higher profile of darts and its players has seen the sport become involved in marketing campaigns. The more popular a sport is, the better the chance of the required message getting across. This month has seen the PDC again take part in Stonewall’s Rainbow Laces campaign.

The campaign promotes the inclusion in sport of LGBT people. It uses the banner ‘Make Sport Everyone’s Game’, and this is the second year that the PDC has supported the campaign. PDC Chief Executive Matthew Porter said that “Darts has been recognised worldwide for its inclusivity as a sport” so is ideal for this campaign. Players will be wearing rainbow laces during the Ladbrokes Players Championship Finals.

Huw Ware, who is a referee and their LGBT+ ambassador, has been named as one of Stonewall’s Sports Champions. This again shows the impact that darts is now making, and Ware commented: "The support of the darts community to last year's campaign was unprecedented, and it highlights that darts is fast becoming a sport for everybody regardless of their sexuality.”

Another example of darts using their growing popularity to help others came in September of this year. They linked up with The Samaritans to help promote World Suicide Prevention Day and their Real People, Real Stories campaign.

Darts has a large male following, and the campaign was aimed at men as that is a crucial problem area as far as the risks of suicide are involved. Reaching out to the darts community was a logical move. The PDC was happy to be included as they take mental wellbeing extremely seriously.

Top player Daryl Gurney hit the headlines when he had his hair shaved. It wasn’t a fashion statement but to raise £20,000 for the Cystic Fibrosis Care charity. This again shows the good that the sport can do now due to its growing popularity.

The PDC has also been able to secure a good number of sponsors. This includes Wienerberger Ltd. Anyone who has ever needed some clay facing bricks or slate roofing products will be familiar with them. Why did they want to become involved with darts? Their Marketing Manager Daniel Cheung said that “the combination of fun and sporting excellence makes darts unique.”

It can be seen, therefore that the growth in the popularity of darts is having a knock-on effect. Darts is now seen by many campaigns as an avenue that they can do down to spread awareness.